Bridging the Gap: Inequality in Retail 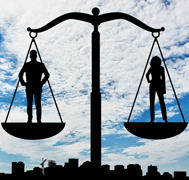 A few weeks ago, we covered a release that focussed on inequality in retail – the gender wage gap. The article discussed a report released by Brock University wherein the authors compiled statistics coupled with survey results that found a startling gap in wages being paid to women compared to men. This week, we’ve decided to take a step back from the operations and sales potential at retail and follow up with a few more statistics and why this is such an issue. You can check that original article out here: https://fr.marketsupport.ca/inequality-in-the-retail-sector-a-major-problem-toronto-star-says/.

We want to preface this by saying that our intention is not to create controversy – the controversy already exists, and the statistics speak for themselves. It is, however, important to note that, in an industry which targets females almost exclusively – women have long been seen as the primary consumers in the home – those covering the retail floor are mostly women and they are being paid less.

According to the report, women, who make up 60% of the overall retail workforce, on average, are paid about $1 less for cashier positions, and at the level of manager, they are paid an average of $5 less per hour.

As Global News notes, “women’s work is valued less, unconsciously or not, even when they’re doing the same work.” Examining results from a Canadian Centre for Policy Alternatives study on income, the article mapped out the gaps according to various factors, including education level, position and industry. The results with regard to retail: in sales and service specifically, women earn 56.52% of what men make.

Of course these inequalities exist across all industries. A recent Statistics Canada release for the Globe and Mail reported that a woman working full time in Canada makes 73.5 cents for every dollar a man makes – that’s a pretty significant discrepancy – and that gap is even larger for aboriginal, racialized and immigrant women. What’s even more surprising is that, as a country that seems to pride itself on striving for equality, Canada has the eighth-highest gender wage gap of 34 industrialized countries, according to the Organization for Economic Co-operation and Development. Read more about this here: http://www.theglobeandmail.com/news/national/women-still-earning-less-money-than-men-despite-gains-in-education-study/article29044130/

It isn’t just the front line where inequality exists. If females are overrepresented in the lowest paid positions, they are underrepresented in the highest. A few years ago, Forbes took a look at leaders in the retail world, and noted that, after years of growth, female leaders are still noticeably few. As is the case with most industries, the majority of the highest paid, most influential positions are held by men – which is odd with retail as this is an industry, as Forbes noted, focussed mainly on a female base of shoppers.

Ironically, all of this brings to light yet another inequality in retail – one that retailers and brands should take note of. If women are the primary consumers, targeting them is smart. However, assuming that men are not can mean losing sales. Over the last few years, numerous studies have found that men are playing a much larger role in household shopping, and thus assuming the retail world is one dominated by women could be hazardous. Perhaps we can take something from this as well.

What does all of this mean? Really, it just means we should be working towards ensuring everyone is paid the same for the same job – in a complicated system, it truly is as simple as that.